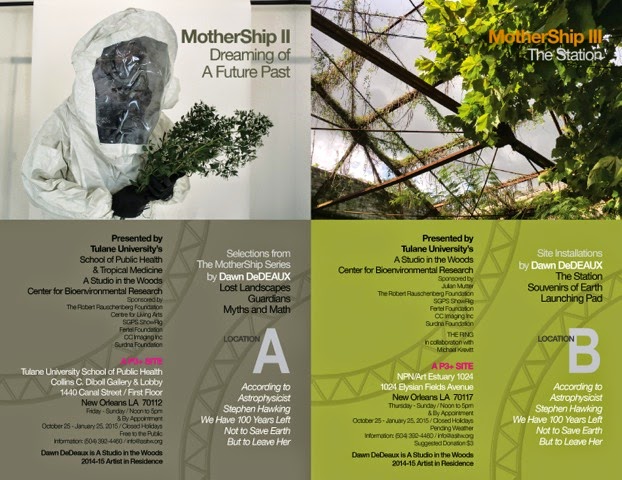 A Studio In The Woods welcomes Dawn DeDeaux as an Artist in Residence presenting Selections from the MotherShip Series as a P3+ Host Site.
DeDeaux’s work will be on view at two locations from October 25, 2014 – January 25, 2015, Closed Holidays.
LOCATION A: Tulane’s School of Public Health, Collins C. Diboll Gallery, 1440 Canal Street, First Floor, New Orleans, LA 70112Friday – Sunday / Noon to 5pm & By Appointment.
LOCATION B:Arts Estuary, 1024 Elysian Fields Avenue, New Orleans, LA 70119Thursday – Sunday / 2 to 5pm, Weather Permitting, & By Appointment.Closing weekend extended hours:
2-9pm Friday 1/23 *weather permitting
12-9pm Saturday & Sunday, 1/24-25 with the Gallatin Street Brass Knuckle Marching Band from 12-5pm
EVENTS:
LOCATION A Opening Reception: Thursday November 20, 2014, 4-7pm at the School of Public Health
LOCATION B Closing Reception Sunday, January 25th 4-8pmThe sculptures and drawings on view are postulations of the future – influenced by collective mythologies that foretell of the future and the hard mathematical and scientific equations foretelling a future not so dissimilar from myth. Also considered is the work of Carl Jung, Will​iam Blake and others who have turned to dreams and symbols belonging to the collective subconscious as roadmaps toward the unknown.DeDeaux is a professional New Orleans-based artist of national stature who can translate the complexities of science and sociology, turning data driven theories into iconic visual forms that speak to public audiences. DeDeaux’s work extends into community engagement and programming to further the outcome of public education and participation in challenges of the day.  Her work is supported both through traditional art foundations and through other underwriters in the fields of science and mental health.This exhibition is presented by A Studio in the Woods, Tulane/Xavier Center for BioEnvironmental Research, Tulane University School of Public Health and Tropical Medicine. The exhibition is sponsored in part by CC Imaging Inc, Centre for Living Arts, Fertel Foundation, Julian Mutter, Piedmont Plastics Inc, The Robert Rauschenberg Foundation, SGPS ShowRig, Surdna Foundation, Catherine Tremaine, Wayne Troyer Architects. THE RING in collaboration with Michael Krevitt.2014 Interview by Acadiana Center for the Arts:

AcA:  What is the history behind MotherShip, the body of work you are currently exploring?

DeDEAUX:  MotherShip is Earth or a means to leave her. The MotherShip series is prompted by the Katrina – BP Oil Spill wake up call: one’s comprehension of future challenges is heightened when viewing the global battlefront from your own back yard – a yard soon to slip into the Gulf [of Mexico].

Such biographical upheaval is combined with my longtime interest in mathematical equations that calculate the future. For example, by 2045 Earth will host 9 billion human inhabitants. Suddenly you realize that this planet of ours is rather small: Where are the resources to sustain 9 billion people? Historically, wars, viruses, natural disasters and now terrorism can deliver huge reductions in the population, but who among us is cheering for this as a solution? Instead we turn to our scientists who are busy trying to make the numbers add up by calculating land mass in relationship to rising seas; identifying zones viable for agricultural growth that will not be impacted by global warming; engineering massive aquaculture farming on epic scale to offset the ever-increasing ocean dead zones and wildlife specie extinctions occurring in record number; envisioning the divisions of fresh water, soon more valuable than gold, measured by the ounce and distributed by the drop to the masses…and so the future unfolds.

To encapsulate these challenges I chose MotherShip as the series unifying title and core icon. MotherShip is both a metaphor for Earth in need of stewardship; and if we fail, MotherShip becomes our constructed lifeline vessel to transport us to new frontiers beyond. If you share the projections of astrophysicist Stephen Hawking, we have 100 years left – not to save the Earth but to leave her. In either outcome, MotherShip is the link to our survival.

AcA:  A reoccuring theme in your work is the concept of collective mytholgy that bridges cultures as well as time. How does this manifest itself within MotherShip?

DeDEAUX:  Mythology:  I am very interested in looking at the mathematical forecasts for the future alongside historical, collective myths that foretell of the end of time.

A centerpiece for the series is a life-size shimmering pale horse that gazes into his own reflected image. This emerged both from my own reoccurring Jungian-like dreams and my research of early-recorded mythological histories where such a white or pale horse appears. I was surprised to learn that such a horse is referenced in a sweeping diversity of cultures as a near-universal symbol for the ‘end of (Earthly) time’ – including Babylonian, Persian, Hindu, Saxon, Asian, Slavic, Native American and Biblical texts such as The Book of Revelations – and as a signifier of triumph over evil, even amidst our predicted annihilation.

I also turn to the rich body of mythic literature that identifies the Ring as a symbol representing the union of people and time – the alpha and omega. The Ring seems mandated to embody the best and worst of mankind–forged not only of metal but also of desire that both creates and destroys in equal measure. For example the ‘desire’ for greater oil profits has led in part to the death of our wetlands.

In my own MotherShip narrative my ring is not like the small gold ring that prompts the Hobbits to risk their lives to save the world, but instead it is an industrial-scaled Ring, modeled after those used to build the early Zeppelins – still the largest air ships built to date. This Zeppelin construction Ring represents for me the dysfunctional marriage of man and technology.

We allowed our uncontrolled use of technology to bring us to this place of potential peril; but ironically we can no longer divorce ourselves from technology, as without it we are certainly doomed.

AcA: Is there a sliver of hope that we can collectively rewrite a strategic script to outwit both myth and math’s gloomy forecast of what the future holds?

DeDEAUX:  The Odds of Hope:  It is difficult for rational folk to dispute the mathematical equations of Steven Hawking that prompt his 100-year theory. But to abandon hope is equally unreasonable. There are David and Goliath stories and ‘to hope’ for good outcome is at the core of humanness and a go-to-script of myth.

It is heartening to see the changing habits of younger generations in terms of energy consumption, alternative energy, organic foods, recycling and the ability to utilize social media to proactively stand up for important issues. There are worldwide efforts but I am specifically proud of the environmental leadership in south Louisiana and how individual groups such as Bucket Brigade, Gulf Restoration Network, Restore Louisiana Now and Levees.org are now working together behind the banner of The Green Army. It seems as though a line has been drawn in the sand, punctuated by the recent Louisiana Legislative effort to kill the lawsuit against oil and gas companies asking for the restoration of dredged canals that contributed to coastal erosion. The effort led by historian and writer John Barry was heroic and it has pushed hope across the threshold.

Coastal Louisiana is Earth’s youngest land mass, and will be among the first lands to disappear. In spite of knowing this, I don’t find myself fraught with an all consuming fatalism – I would rather say I feel a sense of urgency.

Is there a sliver of hope? Every so often the small horse wins against all odds. If not I will ride out on the pale horse into the big ring and leave my losses behind. Of course I will first teach the horse to swim.

Linda Yablonsky at the opening of Prospect on ARTFORUM.com

DawnDeDEAUX is a conceptual artist working in a wide array of media selected as needed to best deliver core ideas. She is one of the first artists in Louisiana to utilize electronic technology, and is considered a pioneer in the creation of fully immersive (in-the-round) synchronized, digital-multi-screen-environments and for sculptures that embed digitized imagery.

DeDeaux is honorary member of Tau Sigma Delta and exhibited winner of Montage 93 International Competition for work to best merge art and technology. She is the recipient of the 1997 American Academy in Rome Prize as McKnight Foundation Visiting Southern Artist and selected among the eight most significant contemporary southern artists by the 1996 Olympics Cultural Committee that premiered her immersive media work The Face of God, In Search of. She is recent 2013 Robert Rauschenberg Foundation Artist in Residence / Fellow where she produced works for her MotherShip series; and the 2014 New Orleans Contemporary Arts Center Silver Circle Artist of the Year.

DeDeaux is the winner of the 1976 Demolition Derby in the Louisiana SuperDome as the only female contestant in a field of 35 drivers.