Sunday Dinner on the Bayou 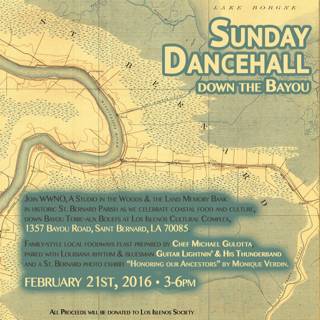 Saint Bernard, a sister Parish of New Orleans located just down river from the old city, has significantly contributed to the rich history and culture of Louisiana. Indigenous peoples once lived along the parish bayous and prairies, and in cypress swamp forest that were once so thick one could not see the sun. Early colonial journals note that the “boeuf savage,” buffalo, roamed along the historic distributary now known as Bayou Terre-aux-Boeufs. The Islenos, Canary Islanders, were settled along the historic bayou in the seventeen hundreds, when the Spanish had possession of the Louisiana territory. Italians, Creoles, Africans, American Indians, Acadians, Spaniards, former Yugoslavians and many others have called these fertile lands and bountiful waters home.

Across south Louisiana, there once was a thriving dancehall tradition. Just about every small community had a dancehall, sometime two or more even. These were sacred places, where community would gather to dance and eat and talk and celebrate. Unfortunately, like our coastal wetlands, the dancehall culture is disappearing in St. Bernard.

In an attempt to resurrect the old community rituals, WWNO, A Studio in the Woods and The Land Memory Bank have partnered to present a Sunday Dancehall down Bayou Terre-aux-Boeufs. Join us as we celebrate coastal food and culture and converse about southeast Louisiana’s hopes, challenges and adaptations.